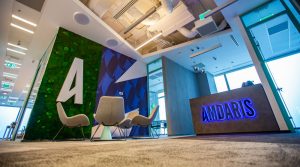 Amdaris has opened a new, state-of-the-art work facility for its delivery centre in Timișoara, Romania.

Situated in a new €442 million, mixed-use development, the 102-seat office provides Amdaris’ employees with one of the top tech workspaces in Europe.

Amdaris team move to most sought after location in Romania

The office is located in a brand-new fourteen story building which was only completed in August 2019, and is located on the coveted 10th floor. This provides the Amdaris team with easy access to an enormous rooftop terrace. Developers are already looking forward to coding in the sunshine as soon as weather allows.

Amdaris’ new delivery centre is part of a wider complex known as Iulius Town. The mixed-use development includes three other office towers, a shopping mall, a grocery store, an on-site childcare provider, a cinema, and the largest health and fitness centre in Romania. The anchor of the complex is a vast park, featuring over 1,400 trees, several playgrounds, an ice rink, and a double-decker carousel.

“Our previous office was not bad, but it was not particularly special either,” she explained. “We were split between levels and we lacked the open spaces for collaborative working and socialising.

“At Amdaris we talk about bringing our ‘A Game.’ That’s exactly what this office does. It tells everyone in Romania’s tech sector that Amdaris is a top employer.”

Another pressing reason for the move was Amdaris’ continued, fast-paced growth. According to Amdaris co-CEO Andy Rogers, the company had simply outgrown its previous premises.

“In the past twelve months, the Timișoara Centre headcount has grown from thirty to over sixty, even though competition for development talent in Romania is intense. Maintaining that level of growth requires having a well known brand and a reputation for caring for our employees.

“The new Iulius Town location accomplishes both goals. It is a high profile location, and we believe it is the best office in the entire complex.”

According to Anna Grier, the team has been enthusiastic about the move.

“Everyone really likes the new office,” she said. “The facilities inside and outside the office are amazing. We feel like Cinderella – suddenly we have become a princess!”