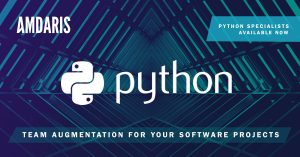 And now for something completely different: the Python programming language!

Yes, Python was indeed named in honour of Monty Python’s Flying Circus, but don’t let the silly name fool you. This is a seriously powerful programming language which is popular with developers everywhere.

How popular? A September 2020 survey named Python as the third most popular programming language in the world behind only Java and C.

Like other major languages, Python is all around us whether we realise it or not. It can be found on apps belonging to Wikipedia, Yahoo, Spotify, Facebook, and Google. Reddit, the content-sharing site beloved by time-wasters everywhere, is written entirely in Python.

The reason Python is popular is simple: founder Guido van Rossum designed written Python code to be simpler for developers to understand (yes, developers do regularly struggle to understand code written by other developers). Python uses a simpler syntax and a less cluttered layout than other languages to ensure its code is more easily understood by anyone.

Python is also extremely versatile and flexible. Instead of having in-built functionality at its core, Python is designed so that adding programmable interfaces to existing applications is straightforward.

As of February 2020, however, the 2.0 version is no longer supported with security updates. If any of your legacy applications are still running Python 2.0, you have a growing security risk on your hands. Get in touch with us to discuss solutions quickly.

Even if you’re not struggling with an outdated version, it’s worth knowing a few of the basics about Python. Here’s our brief guide to what this language does best, and when it’s best avoided:

Which types of projects are a good fit for Python?

Web app development using Python is fast and flexible thanks to this programming language’s versatility. There are also numerous types of libraries available for use in different types of applications.

This flexibility and versatility means Python works well for:

When should Python be avoided?

Despite Python’s general versatility for handling most types of projects, in our opinion Python is not at its best when developing mobile apps. Let’s just say, mobile is not Python’s strong suit.

Python is also not a best fit for low-level embedded software, or enterprise applications which connect to legacy databases.

● Python is easy for developers to read and write thanks to its simple, English-like syntax.
● Its simplicity also means developers tend to be more productive coding in Python than in other languages.
● Python is free and open source.
● There is a huge range of libraries which can support practically any scenario.
● Python applications are easy to adapt for different types of hardware and operating systems (a concept known as “portability”).

● As mentioned above, Python is relatively weak when it comes to mobile computing – an increasingly important part of most developments.
● Unlike languages which use a compiler to turn developer code into 1s and 0s, Python uses a translator. This results in slower execution speed.
● Python is a dynamic language, which means errors sometimes only show up during runtime. This means more extensive testing is needed for Python apps than apps written in other languages.
● Python is not memory efficient. It may be easier for developers to read and write, but this results in Python using significantly more memory than other less-readable languages.

Why is Amdaris the right partner for a Python development?

Amdaris developers have a wealth of experience using Python in a wide variety of situations. Thanks to years of experience, we are very aware of where it works best, and where something else is a better fit.

As a technology-agnostic software design agency, we can offer independent advice for using any language or web framework. If Python is a best fit in your situation – we will tell you.

Are you saddled with a legacy system still using Python 2.0? With no further updates coming there is no time to waste. Should you upgrade to Python 3.0, or is this the right time to try a new language? Speak to our team and we will give you an honest, objective opinion.

If you would like to speak to someone at Amdaris about Python, or any other language or framework, just get in touch.

Call +44(0)117 935 3444 or contact us using the form below and let us know about your next plans. We will help you choose the best technology for making your project a success.