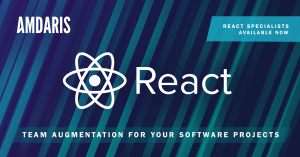 Does your business need a high-performance web application? If so, the React.js framework has a lot to offer.

Also known simply as “React,” React.js is a JavaScript library originally designed for one of the most complex web applications in history: Facebook.

The first version of the framework was produced by Facebook software engineer Jordan Walke in 2011, and was deployed to manage this site’s News Feed system soon after. The following year it was rolled out on Instagram, and in 2013 the React.js code was made open source (and therefore open to the public). Ever since then it has been a highly popular choice for projects everywhere.

Using React for your next project could provide several important advantages, but it is not the right choice for all situations. Here is the Amdaris quick guide to the pros and cons of using React.js for your next web app.

React.js fits literally any web project thanks to its robust API and strong data flow model.

If an app lacks the resources to run JavaScript (which React.js is part of), there are still benefits to be had from other tools in the React ecosystem, like Next.js or Gatsby.js, which can still be used to create static sites or server-rendered sites.

Which projects are not suited for React.js?

As React.js is a front end JavaScript framework, it can only be used to develop User Interfaces for web projects.

The Top 4 reasons for using React.Js:

Are there disadvantages of using this React.js?

React.js has a lot to offer, but it is not perfect. Here are possible downsides to look out for:

Why is Amdaris the right development partner for using React.js?

Amdaris developers have a wealth of experience using React.js, and thanks to growing demand we are steadily growing our team of React.js experts through recruitment and in-house training.

In the last twelve months, we have completed seven major projects using React.js, and we have the capacity to do even more in the coming year.

Amdaris is not exclusively a React.js specialist. If we encounter a project which would be better served by another framework we will not hesitate to say so. We only recommend a technology to our clients if it is the best fit for their needs.

If you would like to speak to someone at Amdaris about React.js, or any other framework, just get in touch.

Email ask@amdaris.com and let us know about your next plans. We will help you choose the best technology for making your project a success!