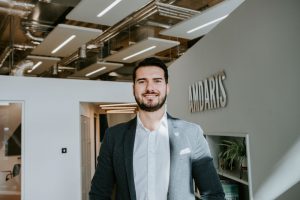 Amdaris Senior Recruitment Manager Mihai Hahui has been shortlisted for the 2020 Recruiter Awards in the Recruitment Leader of the Year category.

Since joining the team in June 2018, Mihai has been a vital part of Amdaris’ continued growth as a company. Originally hired for a combined sales and recruitment role, within two weeks Mihai had been reassigned to a pure recruitment role, and appointed to oversee recruitment company-wide.

Under Mihai’s supervision, the Amdaris recruitment team has more than doubled company headcount. New developers with sought-after development skills in .NET, React, Ruby, PhP, Java, and JavaScript have been added to the development teams in Moldova and Romania.

Mihai has also overseen the recruitment of several members of the senior leadership at Amdaris, including a new sales director, a new finance director, and the head of Amdaris’ new Managed Services division.

“Mihai deserves to be recognized by the recruitment industry for his hard work,” said Amdaris co-CEO Vlad Nanu. “He has produced fantastic results since joining the Amdaris team. Everyone at the company will be wishing him luck on the night.”

The 2020 Recruiter Awards are currently scheduled for 24 September at the JW Marriott Grosvenor House in London.