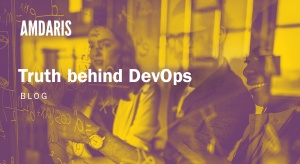 DevOps is a set of common practices that aims to make deployments more frequent, reliable, and less time – consuming. DevOps reduces the time between a code change and its deployment to production.

Removing the boundaries between traditional development (Dev) teams and IT operations (Ops) teams, a DevOps Engineer knows both Development and Operations.

The 3 biggest advantages of DevOps

2. Faster deployments with Continuous Delivery (CD)
CD allows the development team to deploy an application to the production environment much faster. It automates the deployment process so that deployment can be done just by pressing a button. The most advanced way of doing CD is to deploy every change in the production environment, multiple companies such as Facebook and Google have been doing this for years

3. Reliable infrastructure through Infrastructure as Code (IaC)
IaC automates the creation of a new environment using scripts that can stay side by side with source code. It allows us to create a new environment simply by the click of a button. The process of resource allocation (VMs, cloud services, etc.) is no longer managed by a person who needs to remember how to configure everything to make it work, instead, scripts take care of that.

The 3 biggest disadvantages of DevOps

1. Cultural shift
DevOps requires a cultural shift in company processes. The Developers and IT Operations need to be merged in a single structure and work very closely with each other. Developers who are used to doing things in a manual way (manual deployment to the production environment, no automated builds) as it was before the DevOps era, will have to change their mindset towards the DevOps mindset, where everything is automated.

2. Learning curve
For those who are not familiar with DevOps practices, it might be a real challenge. The reason for that is that DevOps has been around for more than 10 years and is at a very mature stage with lots of tools and practices. To overcome this challenge, it would be a good idea for those organisations who are just planning to implement DevOps to take external consultancy.

If you would like to speak to someone at Amdaris about DevOps, just get in touch.

Look out for our next series of blogs which will focus in more detail on Infrastructure as Code (IaC) and Azure Resource Manager (ARM).